Word on the streets has it that football player Trevor Lawrence’s wealth may be down by $15 million due to the Bitcoin crash.

Truth be told, the 2022 crypto crash is inflicting pain in all corners of the community. However, it’s notable that a lot of big-money investors, seem to put their money in Bitcoin. That’s what Trevor Lawrence did. Trevor is a popular American football quarterback playing for the Jacksonville Jaguars in the NFL.

Apparently, when he joined the team, Trevor received a signing package amounting to around roughly $24M. Trevor decided to partner with Blockfolio, to have his signing bonus paid in Bitcoin.

When he received his bonus in BTC, the coin was valued at around $54k per piece. Since then, BTC has shed close to 60% of its value. At press time, BTC is worth roughly $20,700. This means that Trevor’s stash is now worth less than half its original value in USD. His $24M USD is now worth only $8.96M. 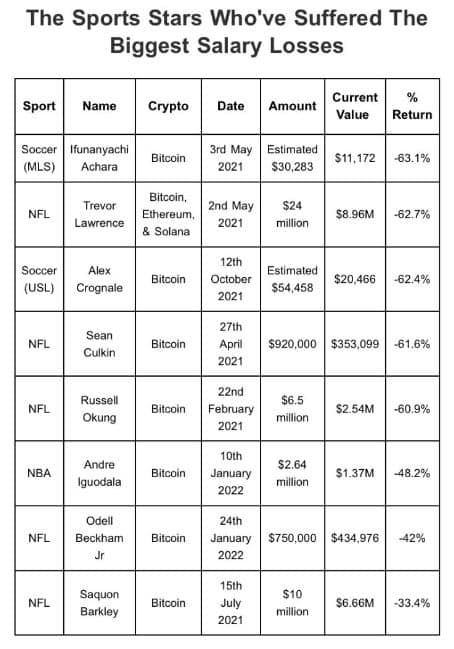 However, it’s notable that after Trevor received his payment, Bitcoin’s price skyrocketed to the high of $69k before going down. In this case, he could have made a significant profit if he cashed out.

Trevor Lawrence isn’t the only sports personality to bet on cryptos. According to a list posted by Sentinel reporter David Furones mentioned above, a number of others did the same. Still, Trevor put in the highest amount.

Is It Truly Gone, Though?

The report about this loss has fueled a debate on whether it’s really smart to put money in cryptocurrencies like BTC. According to some, who somehow appear not to know much about the crypto industry, it’s a bad move that leads to loss of money. This notion can be seen in how Trevor’s apparent loss is reported. From a rookie’s point of view, he totally lost money. From a crypto-savvy point of view, his BTC stash is simply temporarily devalued.

The crypto market has had its ups and downs over the years. A bear market, regardless of how long it takes, always ends up turning into a strong bull run. In this case, Trevor Lawrence could be in for huge profits when BTC finally pumps if he didn’t cash out his stash.